The City of God (Books that Matter) 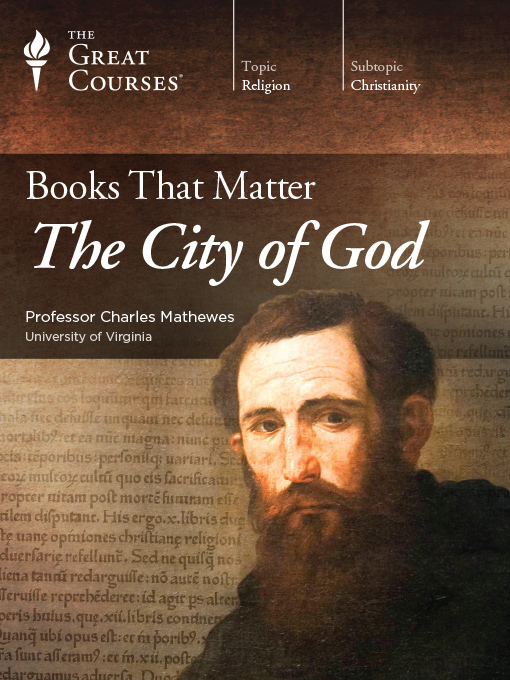 The City of God (Books that Matter) by Professor Charles Mathewes

Augustine of Hippo’s magnum opus The City of God is one of the greatest works of the Western intellectual tradition—so powerful, in fact, that one could argue all of Christian theology has been a series of footnotes to Augustine. Written during the transition from antiquity to the rise of Christianity, it is one of the key texts in defining our ethical framework into the 21st century. Yet even serious readers can be intimidated by a book that spans over 1,000 pages.

Lecture 1: Your Passport to The City of God

The City of God is a monumental work-not just for its scale and structure, but for what it asks of us as readers. In this first lecture, dive into the many layers of this powerful book, surveying why Augustine wrote it, for whom, and what impact it still has on our world today.

Lecture 2: Who Was Augustine of Hippo?

Examine the paradoxical life of Augustine: Who was he? Why is he such an important historical figure? You'll be surprised that much of what we may associate with him, such as his metaphysical dualism and his antidemocratic adherence to Church law, is mistaken. Here, you'll uncover the real Augustine-and find a man not so unlike ourselves.

A bit of his life and times. Discussion of the Donatist controversy, and the Pelagian controversy, which still brews on today. There's also an interesting passage on thinking and fame around 22:30 in the lecture.

There's some interesting subtext of the ideas of the "stream and the garden" here in thinking about Augustine in his own time versus what has crystallized for us now in the present. The "stream" here could relate to the quotidien passing of time in an individual's live while the "garden" could be taken to be the crystalized ideas written in Augustine's work. Even Augustine changed his though over and throughout his lifetime, so we shouldn't place too much emphasis on any particular words as he himself may have evolved his thought at a later time. Mathewes makes and underlines the point that we can't idolize Augustine who had his own life and times and that we shouldn't idolize his writing which was applicable then, but may not be directly applicable (especially without the underlying context) to us now. Certainly it can help to inform us, but we should still do the thinking and reasoning for ourselves.

Augustine [of Hippo] knew the power and the danger of idolatry and celebrity. And he knew the danger of both was first to permit the idolater to offload the duty of thinking onto their idol. And second to seduce the celebrity, in turn, into thinking his fans have nothing insightful to say. That treatment of a fellow human, a fellow christian, would be not the achievement of theology but the avoidance of it. And he went out of his way in his life and in his words to forestall such approaches.

I can't help but apply this statement to the blind followers of Donald J. Trump.

While Roman elites viewed the sack of Rome as a turning point that changed the world forever, the event itself lasted only three days and served more as a catalyst for change than a cataclysm in its own right. In this lecture, you'll find out why the sack was so monumental, and how it inspired Augustine to write The City of God.

Before delving into the text of The City of God, Professor Mathewes sets the stage with some context about the many audiences that Augustine was writing for, as well as the arguments against Christians that he was confronting. See how Augustine co-opted Roman notions of city" and "glory" and applied them to his divine purpose."

Lecture 5: The Problem of Suffering

Book 1 opens by addressing civic-minded Roman citizens looking for happiness in this life-a mistake, Augustine believes. By exploring the problem of evil and questions of suffering and suicide, you'll discover how Augustine's approach toward life differs from the Roman view, yet is arguably more life affirming and even therapeutic.

Immanent critique is a method of discussing culture which aims to locate contradictions in society's rules and systems. This method is used in the study of cultural forms in philosophy and the social sciences and humanities. —Wikipedia

Lecture 6: The Price of Empire

Continue your study of Augustine's argument toward civic-minded Romans by reviewing his attacks on their morality and their sense of self-regard. Using their own historians as evidence, Augustine teases out the logical and psychological implications of the Romans' quest for domination, which Augustine says is born out of a longing for transcendent joy.

Augustine had a clearly defined political philosophy that ran against the grain of Roman beliefs. Here, examine his view that there is no distinction between gangsters and statesmen, and that the difference between conquering and theft is merely one of perspective. Reflect on this political realism" and what it means for the Roman state."

Some great history of politics and political thought here. In particular comparing it to our own time, it would appear that modern "Christians" have completely forgotten the lessons of Augustine and they have become the power hungry Romans of our time. The only question that remains is who or what will play the role of the barbarians?"

Mathews quotes from the movie Married to the Mob (Orion, 1988):

Angela de Marco: God, you people work just like the mob! There's no difference.
Regional Director Franklin: Oh, there's a big difference, Mrs. de Marco. The mob is run by murdering, thieving, lying, cheating psychopaths. We work for the President of the United States of America.

This prefaces the story of Alexander (The Great) and the Pirate which is synopsized as: Pirate on being chastized by Alexander for piracy: I plunder just the local sea with my small boat, you plunder the entire world and only change your title to Emperor

I feel like the Republican administrations we've seen recently are allowing just this sort of behavior.

In this lecture, you'll reach the climax of Augustine's argument toward civic-minded Romans, which answers the question of how best to pursue happiness while also being a good citizen. The answer takes you through a dazzling discussion of fate versus free will, the nature of divine providence, the errors of glory-seeking, and the tragic nature of the world.

Turn to The City of God's next set of arguments, which in Books 6 to 10 are aimed toward Roman philosophers who had a different-if still incorrect, according to Augustine-view of religion. After studying the role of religion in Roman society, Professor Mathewes analyzes Augustine's critique of one particular philosopher, Varro.

Etymologies of these words:

Gods are long ago humans that memory has turned into heros, then legends, and finally gods. (Memory plays a big part here.)

Analogs to these today might be entertainment, science, and politics.

What does philosophy mean? happiness? None are as good as the platonists.

Apathea as stillness or condition of not having feelings or passions

Okay lecture, but not as interesting to me. I preferred the one on politics a bit more. Probably wouldn’t revisit this one again.