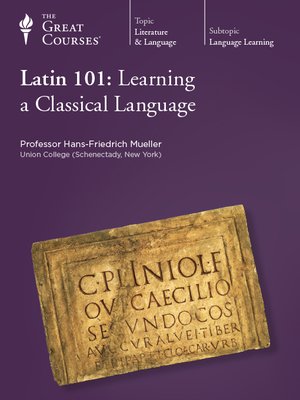 Latin lives! The language of Caesar, Cicero, Virgil, St. Jerome, and countless other great authors is alive and well in the modern world. It lives in the Romance languages, which are the lineal descendants of Latin. It flourishes in English, which draws a major part of its vocabulary from Latin. It thrives in the technical terms of science, law, and other fields. Latin is used in the traditional liturgy and proclamations of the Catholic Church. And it is the language of choice for inscriptions, mottoes, and any idea that needs to be stated with permanence and precision.

Salvete! Greetings! Ease into your study of Latin by admiring its beauty and impressive history. Then focus on the letters and sounds of the restored classical pronunciation, which approximates the way Latin was spoken in the classical era. Finally, cover the rules of accents.

Begin your adventure in Latin verbs with the third conjugation, practicing the present tense indicative of ago (I do). Learn the four principal parts of ago-the key words that allow you to conjugate any form-as well as the imperative endings that permit you to issue commands.

bellum agere reads as: war to do or to do war. We would say wage war.

Lecture 3 Introduction to the Subjunctive Mood

See how the long vowel a" is the key to the present subjunctive mood in verbs such as pono (I place). The subjunctive expresses doubt or potential, and you explore its use by the poet Catullus in one of the most famous love poems to survive from the ancient world."

Linguam Latīnam discunt, ut in Rōmā antīquā vīvant. They learn the Latin language, so that they may live in ancient Rome. Intellectually that is. As a way to forget about the present troubles, which is actually a pretty good reason to learn Latin.

Learn two important irregular verbs, sum (I am) and possum (I am able), mastering their present tense indicative, imperative, infinitive, and subjunctive forms. Notice how the tiniest linguistic details can be powerful markers, giving rise to Latin's great economy of expression.

Having conjugated verbs, now learn to decline nouns. In this lecture, investigate the largest class of nouns, called third declension. Discover the function of the five cases and how to identify the noun stem. Then practice with masculine and feminine nouns.

After a review of verb and noun endings covered so far, focus on third- declension neuter nouns, specifically the word corpus (body). Note the distinctive features of the neuter declension, then practice these endings. Close by exploring several celebrated Latin expressions that feature corpus.

I'm enjoying the way he subtly throws in small snippets of Latin into his lectures to slowly create an immersive experience.